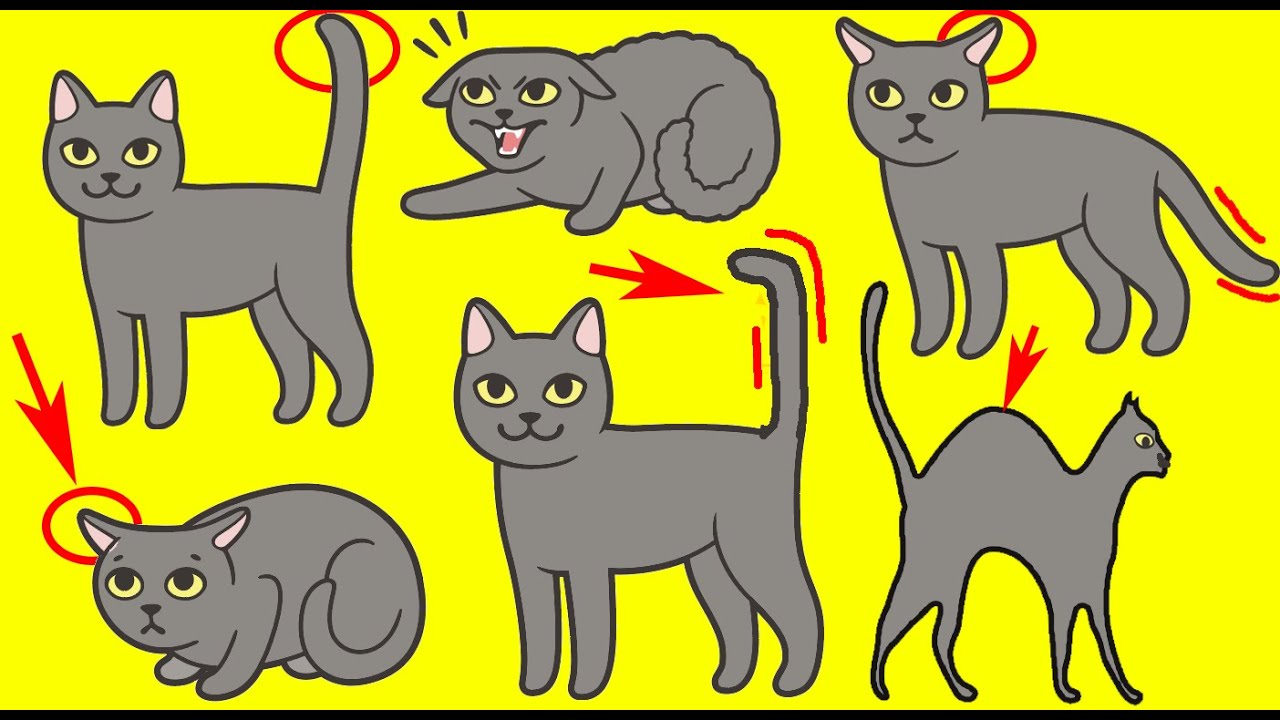 Cats non-verbal messages and communication clues are often puzzling. For centuries, cats have been regarded as unpredictable, mysterious and solitary. it’s pertinent to understand the rationale behind the behavior and adaptations of cats.
In this video, you will learn the essentials that will help you understand and communicate with your cat.

When the ears are slightly bent forward, the cat is particularly telling you that it is playful and curious. Most times, this gesture is spotted when the cat is given a new toy or seen a new thing.
When the ears are pinned back and flat, your cat is certainly very angry at something or maybe at you. This gesture is most often followed by hissing or growling. Sometime, this gesture can also suggest fear.
When the ears are straight and upright, something has got your cat’s attention. Animals in the wild do this instinctively so they could hear more and ascertain if a coming sound meant danger or not.
The Eyes

When your cat stares at you and slowly blinking its eyes, it simply means the cat adores you. Humans are even fond of this slow blinking of the eyes especially when flirting with someone they admire.
If however, your cat looks at you with a slit, constricted pupils, it’s definitely angry with you over something. This look is often given in the absence of an expected treat.
Dilated pupils are often a sign of excitement. Just like kids, when cats get excited their pupils dilate and become larger telling you it is excited and ready to play. This sort of body language can often be observed when the cat is happily playing with or attacking a toy.
Sometimes dilated pupils can also mean defensiveness or aggression especially when the look is accompanied by hissing or growling sounds.
Tail Signs

The tail signs of cat are one of the most communicative in the animal kingdom. Unlike the dogs whose major communication through the tail involves wagging to show excitement, the cat has a number of different tail sign to communicate different feelings and emotions.
Wagging of the tail
Tail wagging is a sign of frustration in the feline family rather than excitement as common with other pets.
When your cat wags its tail, it probably isn’t happy about something and you better avoid petting them at that instance as it can lead to a few scratches.
Puffed up tail
Seeing a kitten with a puffed up tail can be very amusing but it is anything but that. When your kitten puffs up its tails, it most often is frightened of something and if followed by a hissing sound then it is preparing for attack. By puffing up its tail, the cat displays a “larger-than-life” attitude and sends signals to the enemy that it is scary to deal with.
Twitching of the tail
Cats twitch their tails when they are ready or excited to play. Tail twitching is quite similar to tail wagging but often involves lots of flicks of the tail at its tip.
Tucked away tail
Running with tails in-between ones legs has always been an idiom for submission and anxiety. Your cat is nervous if it tuck its tail.
Curved tail
Curved tail is often a sign of curiosity in cat. When cats have their tail curved like the question mark sign, it means they are ready to explore. So if you’ve been looking for a good time to expose your cat to a new toy or activity, whenever the tail is curved might be a good time.
Embracing tail
When cats have their tails curled up all around them or around other cats in embrace, they are mostly communicating happiness, and satisfaction.

Aside the ears, eyes and the tail, cats also express themselves using their whole body.
Cats lying on their back with the belly exposed
When your cat lies close to you on its back with the belly exposed its simply communicating a level of trust and confidence in your friendship.
If this pose is actually followed with a hissing sound or a growl, you may want to avoid the temptation of reaching out and scratching its belly as they are most often agitated and ready to strike.
Arched back
An arched back is often a sign that your cat wants you to cuddle or pet them. This is an opportunity you wouldn’t want to miss to make your cat feel loved and welcomed at all times.
If the arched back is combined with bristled hairs, your cat is probably frightened of or angry at something.
Rubbing its body against you
Most times when a cat rubs its cheek against the owners, they believe
Kneading

Butt wiggling
Butt wiggling is not a show of excitement as often portrayed in animated series. Most times when your cat wiggles its butt, it’s getting ready to pounce on something or stalking its prey.
Cat Vocalizations

Purring
The purring sound is one of the most beautiful sounds cat makes and for all it’s worth, it signifies your cat’s sweet affection for you.

Mastering the Art of Cat Training: Tips and Techniques
The 10 Signs Your Cat Has Imprinted On You
🤣HOLDING YOUR LAUGH while Watching these video😹 – Funny Cats Life
😂 How to Litter Train A Kitten ? ( Leave Comment Below )#shorts
Exploding Kittens: Recipes for Disaster (asmodee) – Die ultimative Sammlung zu Exploding Kittens