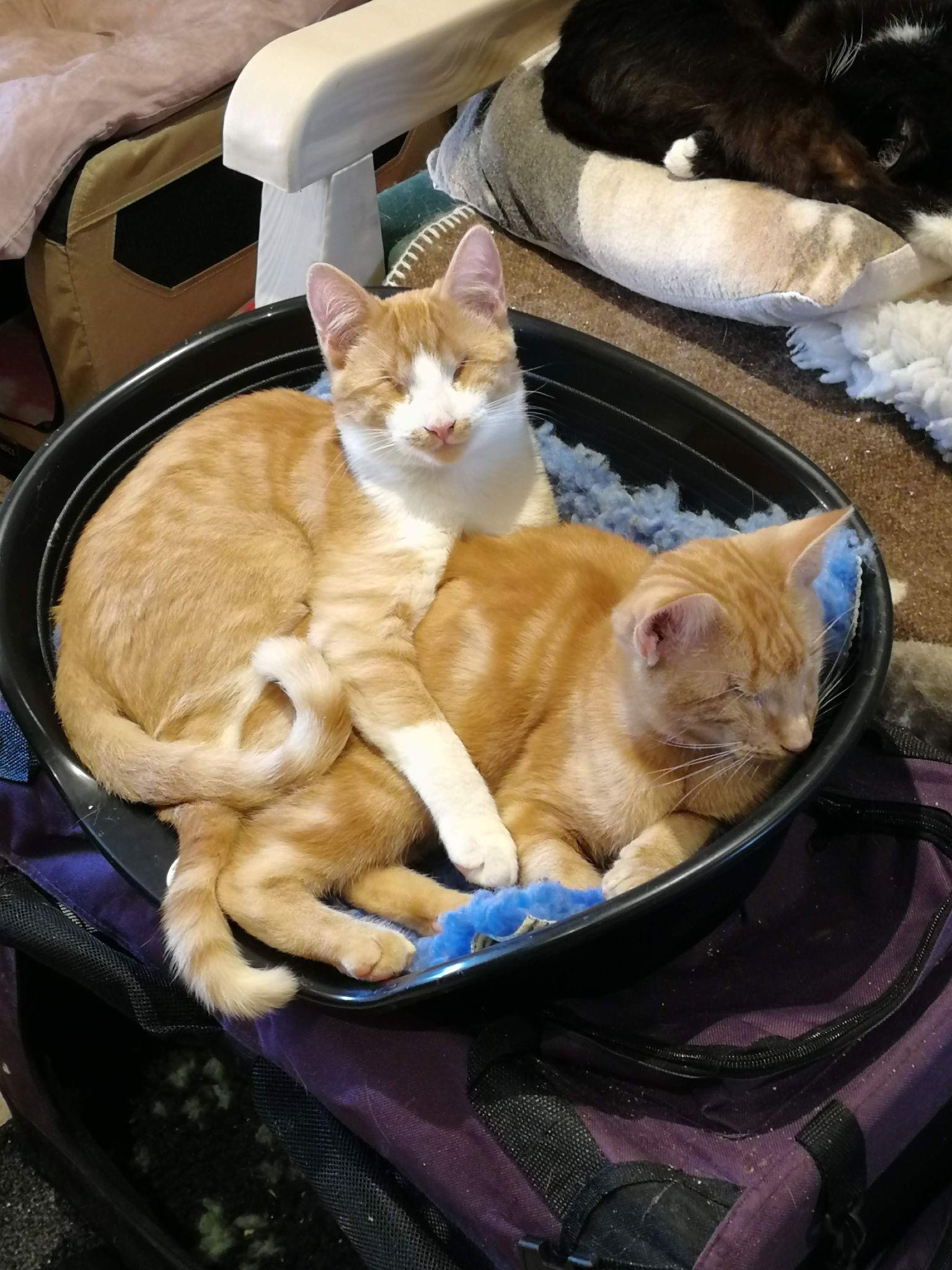 Two blind kittens who were rescued from a builders’ yard and were reunited in a ‘Christmas miracle’ last winter are now living the life in a wonderful new home with other special needs cats.

Ginger kitten Gabriel – named after the Christmas angel – was 14-weeks-old when he was found straying in Peterlee, County Durham, and rescued by the RSPCA just days before Christmas (on 20 December 2020).

Inspector Krissy Raine, who rescued him, said: “We believe poor Gabriel lost both of his eyes after having cat flu as a tiny kitten and that left him with empty eye sockets. After telling one of my colleagues about his story we realised she’d rescued another little kitten from the same area a few weeks before and that they were brothers.

“It was so wonderful to reunite them; it was a Christmas miracle. They instantly recognised each other and it was really heartwarming to know that they had each other again.”

Ginger and white kitten Arthur had been rescued six weeks earlier from the same site and needed surgery to remove one of his eyes, which had been damaged by entropion (a painful condition where the eyelid turns inward and the eyelashes rub on the eye). Sadly, during surgery, vets found Arthur’s second eye was also damaged and they made the difficult decision to remove this eye too.

Staff at the RSPCA Cat Hub* – which cared for the kittens – were concerned about how hard it might be to find a home for a pair of blind kittens together – but when experienced cat owner Helen Marritt (44) from County Durham and her family came forward, it was a match made in heaven.

Helen, Andy and 16-year-old daughter Willow fell in love with adopting special needs cats after taking on one-eyed Greebo, who had a broken leg.

Helen said: “He needed lots of love and care to recover; he’d had such a bad start in life and was really nervous around us and our other cats. Slowly he started healing and became my little shadow, as well as forming really strong bonds with all our other cats. It was both really rewarding to see him come so far in a short time, but also to know that we’d given him a safe and happy little life, as nobody else had wanted to adopt him. 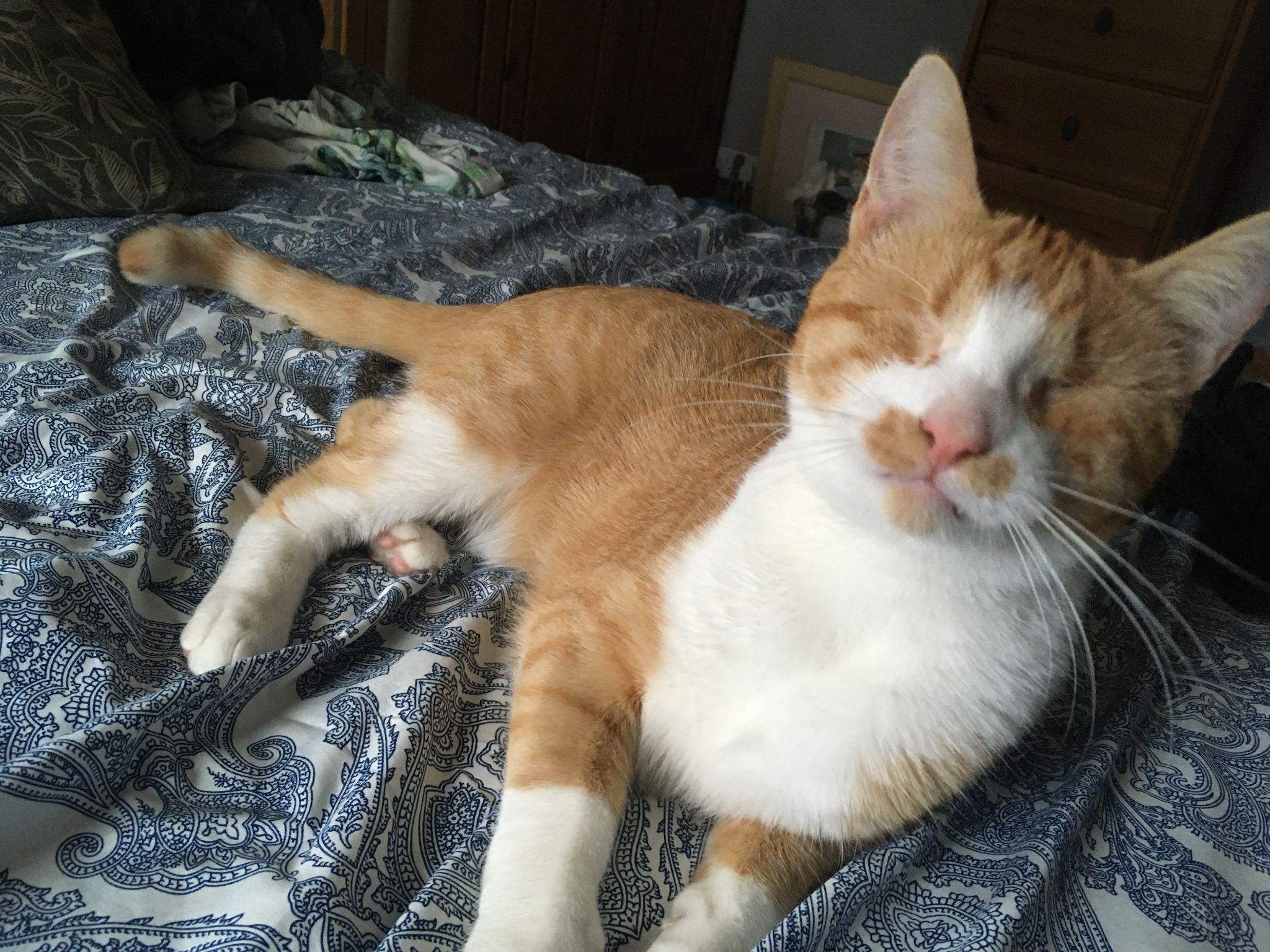 “Ever since we adopted him we’d been discussing adopting another cat with special needs as we have the love, time and space to really care for a special cat. We decided over the summer that the time was right for us to adopt another cat and we looked on the RSPCA cat hub website and came across Arthur and Gabriel. Somehow we’d managed to miss all the press about them looking for a home so we had no clue that they were famous!

“As soon as we saw Arthur and Gabriel we just knew that they were the right cats for us. I read up everything I could find about looking after blind cats and fell in love with them even more! They’ve settled in so well and, after a little bit of confusion to start, all of the cats are bumbling along really well with each other now.

“Greebo is especially loving having some new cats to play with and they all spend hours chasing balls around the room. It’s hard to believe sometimes that Arthur and Gabriel can’t see, it’s truly amazing watching them play, they’re so clever.

“Arthur enjoys ‘helping’ Andy work from home by climbing up on his shoulders and keeping him company. Gabriel is less keen on human company, but loves all our other cats and follows them around, which is really sweet.”

The couple are looking forward to their first Christmas with eight cats and will be showering their new additions – Arthur and Gabriel – with lots of affection and fuss.

“Christmas with all eight cats will be hilariously chaotic; we’re already making bets on how long the Christmas tree will stay up, especially as Arthur and Gabriel are so curious and love to climb! They both love playing in boxes and chasing scrunched up balls of paper so Christmas Day will be heaven for them!

“All of the cats will get their own special stocking so the mantelpiece will be a bit full this year but we wouldn’t have it any other way. Arthur and Gabriel are our little Christmas miracles and we love them so much.”

To Join the Christmas Rescue and help our rescuers be there for the animals in need this winter, please visit www.rspca.org.uk/rescuexmas.