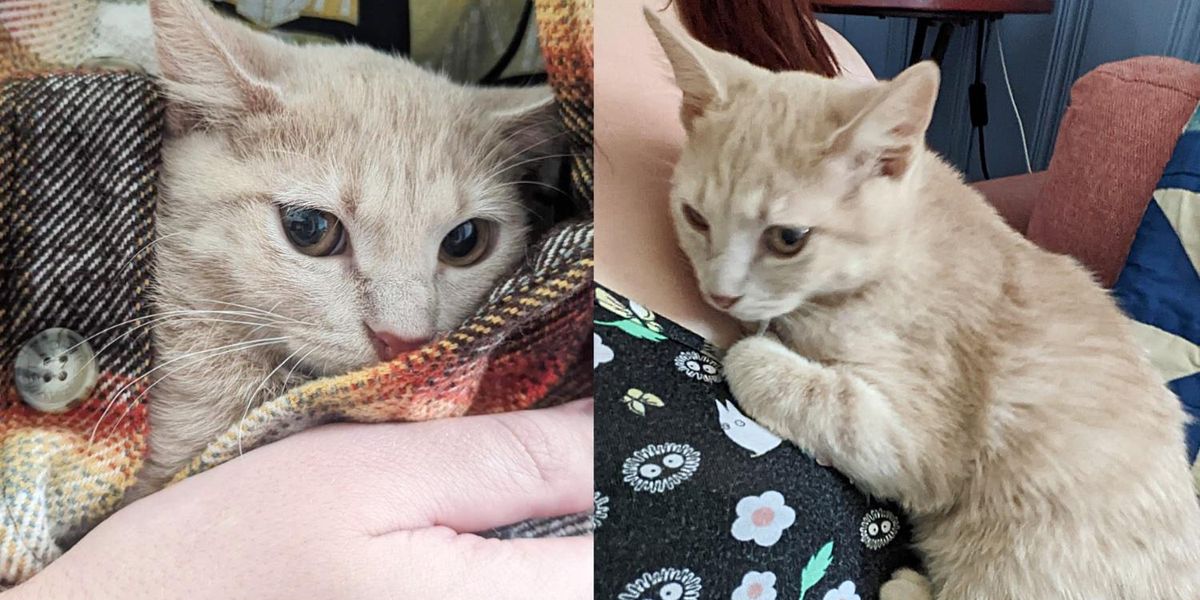 A skittish kitten turned into the snuggliest cat they’d ever seen, and melted their hearts.

A very timid kitten was rescued along with his littermates and brought into an animal clinic for help. He was more skittish than his brothers and in desperate need of socialization.

The kitten was covered in so much dirt that his fur color wasn’t fully revealed until he had a thorough bath. He continued cowering behind the other kittens and was too scared to move.

The kitten named Fish was so timid that he kept shoving himself in a corner. Amanda and Garrett, volunteers of the rescue, provided a comfortable, quiet room for him to decompress.

Fish slowly warmed up to his foster parents and accepted their pets and love. Eventually, he made his way onto his people and into their arms. He even tucked himself under their shirt for some extra TLC.

Fish was still very shy and clung to Amanda and Garrett for constant comfort. He insisted on being in their presence and having multiple cuddle sessions throughout the day.

“We have no doubt Fish will blossom with all the love that is headed his way.”

All he wanted to do was cuddleAmanda at Sparkle Cat Rescue

They found the sweet tabby napping on their shoulder instead of his own cat beds. He turned into mush whenever he was held as all the worries faded away.

“Fish is one of the most snuggly cats I’ve ever met,” Amanda wrote on Facebook.

With lots of reassurance and plenty of hugs to go around, Fish slowly came out of his shell and began to lounge around on the floor instead of retreating into a hideout.

He was able to walk much taller with his newfound confidence and became more inquisitive by the day.

When Fish met Basil, the resident cat, he was completely enamored of his new friend. He rubbed his face against him and started following Basil around the house.

Basil, a Sparkle Cat Rescue alumnus, took the little guy under his wing as if he knew what Fish needed to be brave.

When they climbed onto a scratching post together, Basil took his buddy by the arm and gave Fish the sweetest brotherly hug.

“Basil is a great tutor and is grooming and playing with Fish,” Sparkle Cat Rescue shared.

“Fish is blossoming in his foster home, where he waits for the next step towards finding a forever home. He will need a kind cat buddy to pal around with and an adopter with time to spend cuddling.”

The once timid kitten has grown in size and courage. He is enjoying the company of his human and feline friends, and his favorite thing to do is snuggle with his people and soak up all the love.

With a second chance and a loving foster home, Fish has turned into a major love-bug, and is the happiest kitty he’s ever been.

Related story: Kittens Turn a Corner as Unbreakable Duo after Being Found Outside a House, and Grow into Gorgeous Cats