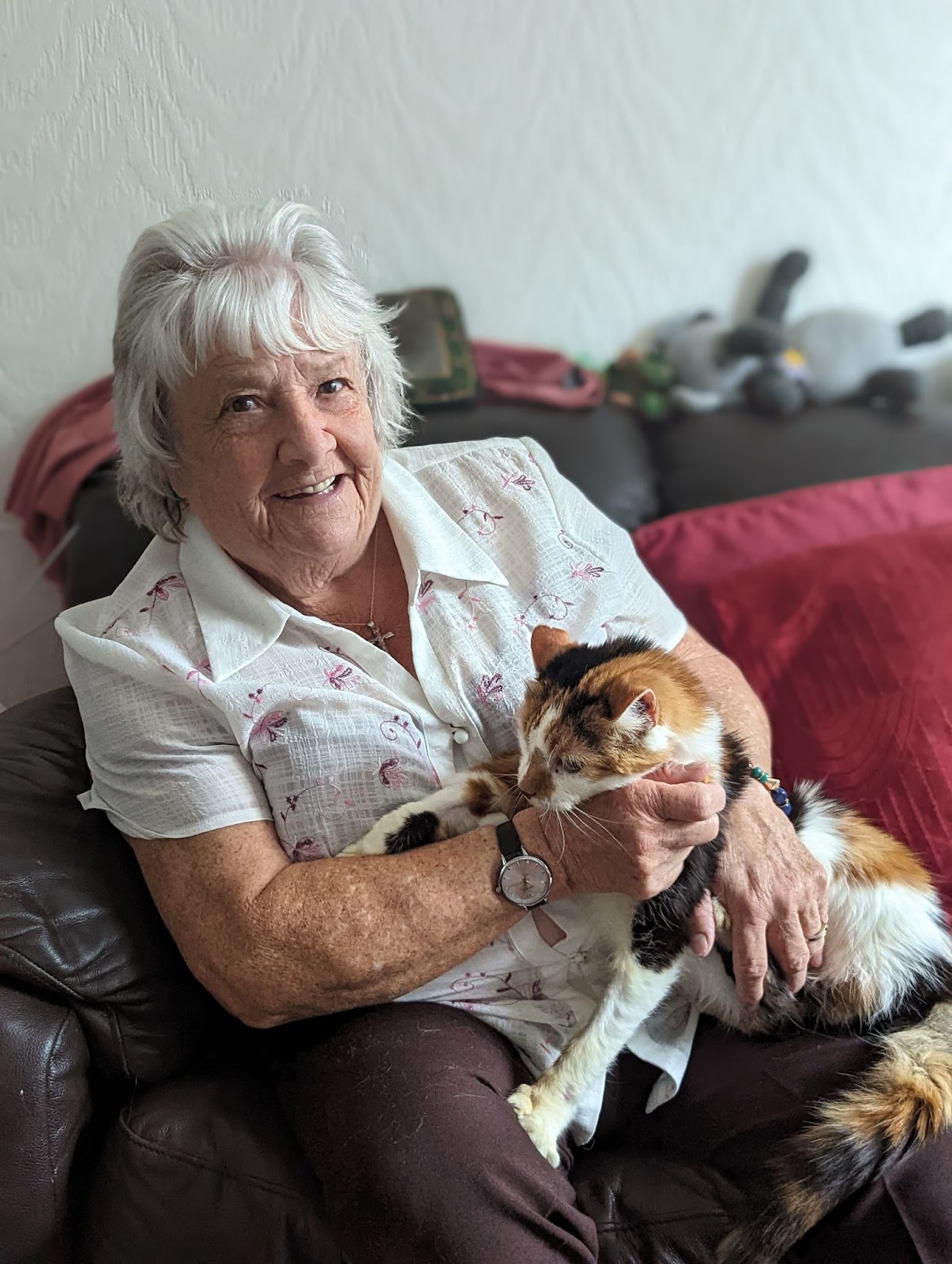 A pensioner couple were amazed when they were reunited with their pet cat six years after she went missing – thanks to the RSPCA and the power of a microchip.

Pauline and Trevor Robinson gave up hope of ever seeing Georgie again after she darted out of a window at their home near Durham.

But what appeared to be a routine welfare call for RSPCA inspector John Lawson last month turned into a happy reunion.

The inspector had been alerted to a cat, who was underweight and suffering from an open sore on her throat, living in bushes on Front Street in Pity Me.

A check revealed Georgie was microchipped and that her owners resided just around the corner in Hudspeth Crescent.

Pauline and Trevor had not seen their pet since September 2016 and were so upset when she went missing they had a plaque made in her memory.

After an emotional reunion, Georgie, who is now 14-years-old, is settling back home and is preparing to meet the couple’s two other cats, Charlie and Sabrina, and rescue dog, Bree.

She immediately made a beeline for the house’s cat bowls and litter trays as if she had never been away, says Pauline, who plans on introducing her to the rest of her pets gradually because of the trauma she has suffered.

“Georgie was eight when she went missing. We had her as a kitten from the same litter as another cat, Fudge, who has passed now. We were so upset we knocked on doors and put up posters for weeks to try and find her, but eventually we accepted that she wasn’t coming back and that she had probably died,” recalled Pauline.

“It’s a miracle really and we couldn’t understand how she was so close to us. My son lives on Front Street and we used to walk down that way with our dog.

“Maybe someone took her in for some of those years because I don’t think she would have survived living rough for that long.

“We’d been out one night and there was a card from the RSPCA put through the door saying they thought they’d found our cat. Once they described her to me I knew it was her.

“She went straight onto my knee as if she hadn’t been away – I had a few tears I must admit. The RSPCA has been tip-top and it does show that microchipping works.”

The happy story enfolded after a local resident contacted the RSPCA over concerns about the health of a stray cat. Georgie proved elusive to catch at first and the inspector made a return trip with a cat trap (pictured) to coax her into welcoming arms.

She received veterinary treatment for her neck problem and remains on a course of steroids, but is reported to be making good progress after her years of feral living.

“Georgie wasn’t doing very well to be honest when I found her,” said inspector Lawson. “She was very underweight and had a flea infection. She was living rough and a resident who was feeding her said she’d been aware of her for at least two years.

“Tins of tuna were being put down for her and it appears she limped on, helped by the kindness of strangers.

“But despite everything she was very friendly when we found her and she was so happy to see her owners – she didn’t move from Pauline’s knee.

“Georgie had been a house cat who never ventured out, until she got out through a window. It’s incredible she was living maybe just three streets away from Pauline and Trevor.

“It also demonstrates the importance of getting cats microchipped. Georgie would not have been reunited with her owners without one.”

To help the RSPCA continue rescuing, rehabilitating and rehoming animals in desperate need of care please visit their website or call their donation line on 0300 123 8181.

64 Cats Found in Colorado Home
😹 You Definitely Laugh, Trust me 😱 – Funniest Cats Expression Video 😇 – Funny Cats Life
Funniest Dogs And Cats Videos 😅 – Best Funny Animal Videos 2022 😜👌 #8
Kitten Who Was Accepted by Other Cats, Starts to Hug Them and Look Out for Them
Cat Has Never Lost Focus on Caring for Her Kitten After They Were Found Together Outside