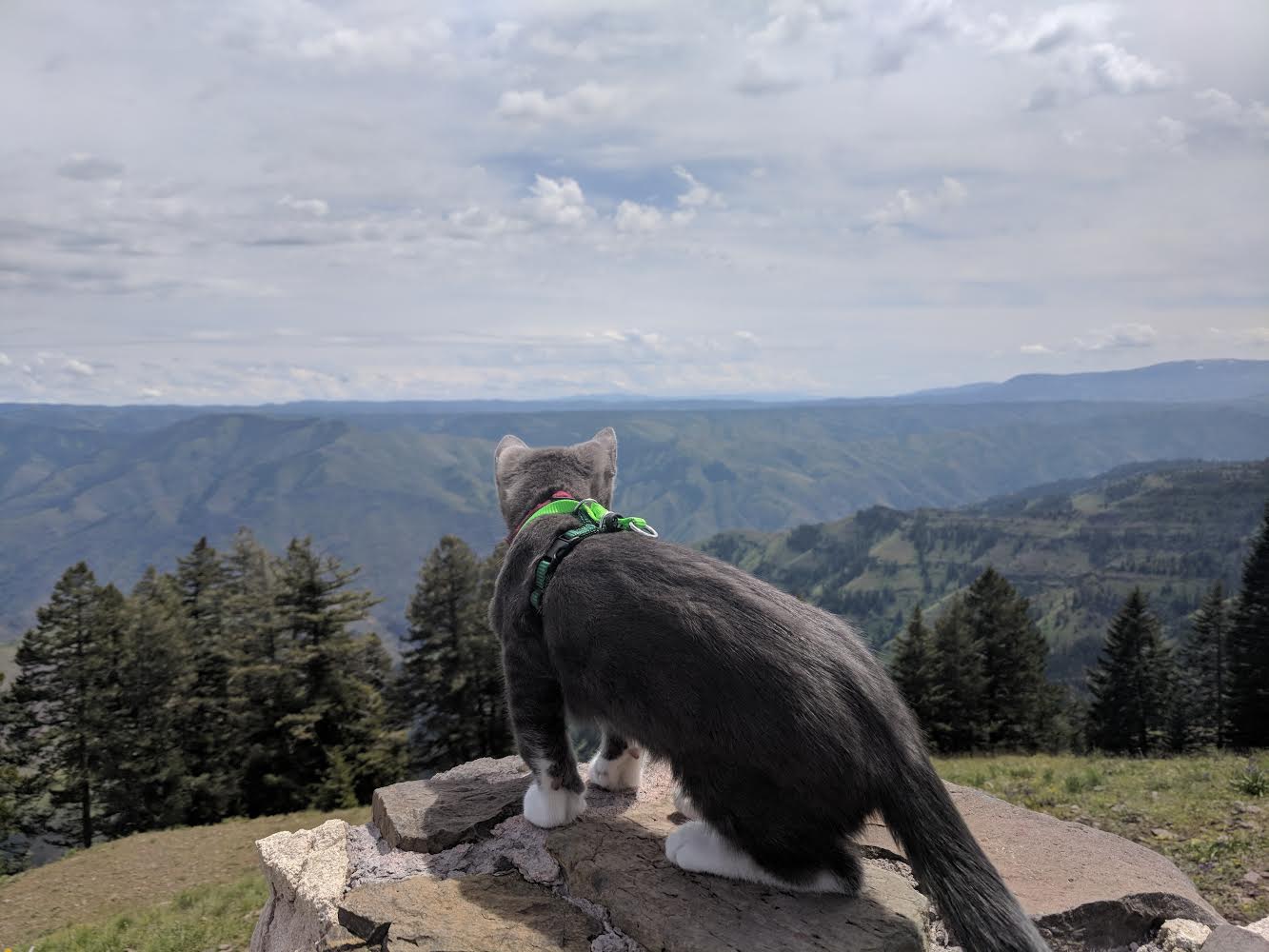 Adventure cats come in all shapes and sizes.

Veterinary student Summer Ott learned just how different some adventure cats can be when she adopted Parsley, a previously shy barn kitten with a knack for tree climbing, kayaking and even swimming. Parsley also happens to have a congenital bone deformity that prevents his legs from growing properly.

Parsley began life as a small, shy barn kitten who hid from people. But because of coyotes and feral cats in the area, Ott was worried Parsley might not survive on his own. She remembers taking a friend to pick out a kitten from the litter — her friend chose a social and outgoing kitten — but it was timid little Parsley who stayed on her mind. 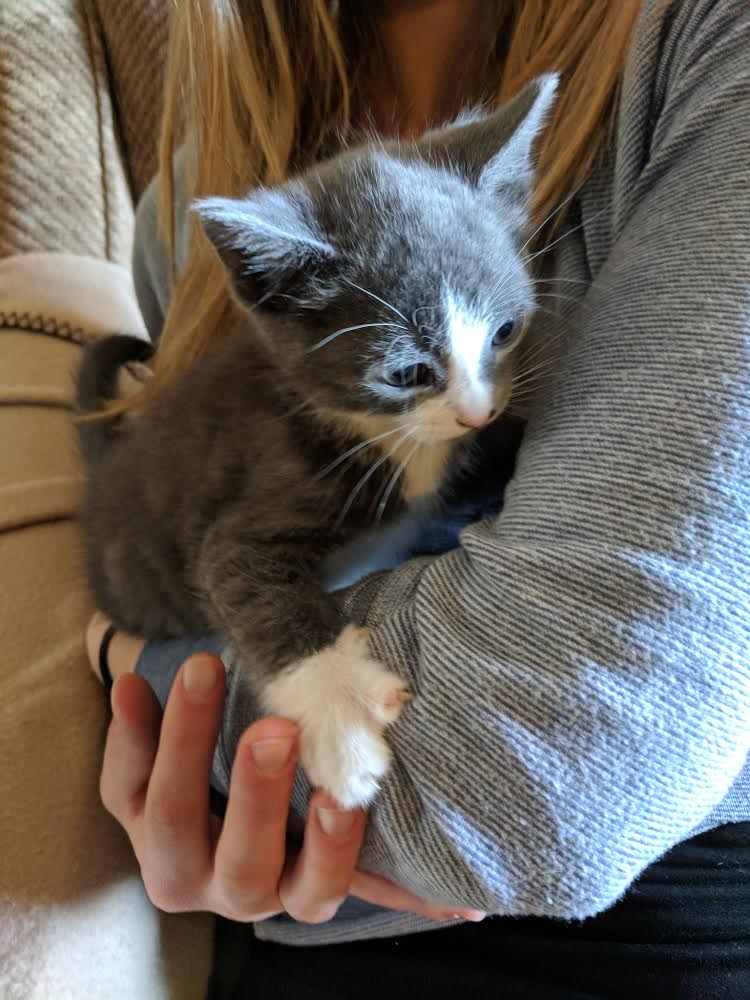 “I had a lingering ache for that one shy kitty that no one else was going to adopt,” Ott said. “He had a gentleness about him, but was very sweet around people he trusted.”

Ott’s instincts were right. Parsley turned out to be a great companion.

“[Adopting him] is truly was the best decision I’ve ever made, even if it was semi-impulsive,” she said. 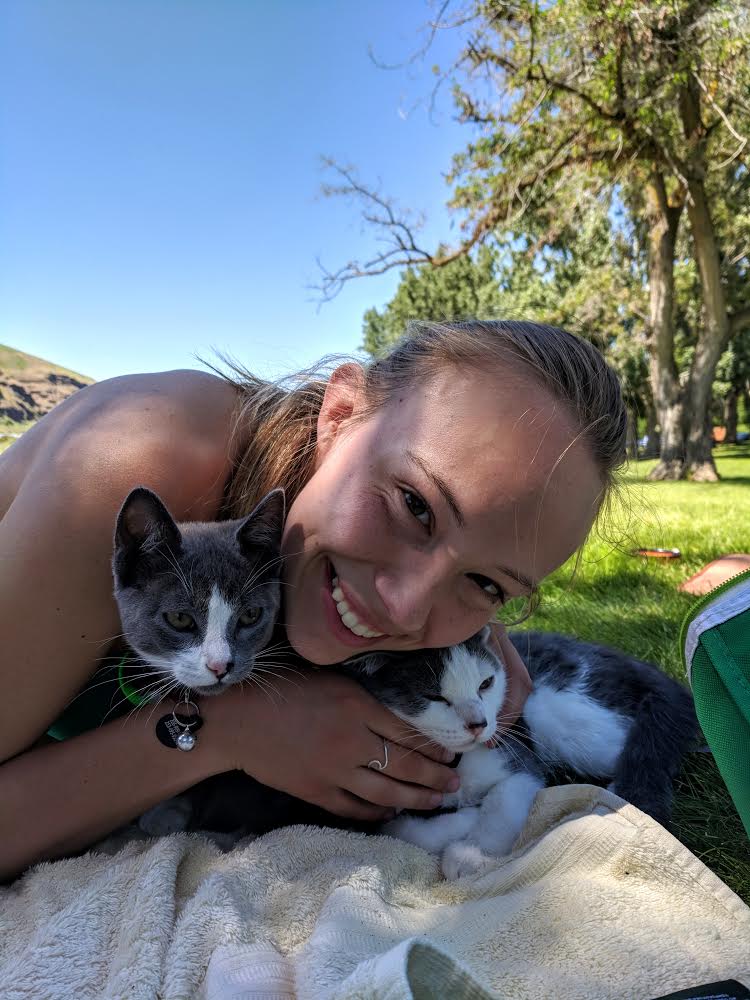 When it came time to name her new friend, though, the decision was practically made for her. A friend had a cat named Chowder, and Parsley’s litter mate had been dubbed Pickles. So Ott knew her cat needed a food-related name as well.

“He also has brilliant green eyes, so we narrowed down the choice to a green food, which happened to be the bright green herb, parsley.”

But soon it was apparent that Parsley wasn’t growing like other kittens. Ott says he’d always been a bit clumsy, but she also noticed he was walking differently than his litter mates. So she took him to the veterinary teaching hospital at Washington State University to get a specialized orthopedic consultation.

After a thorough evaluation, the veterinary students determined Parsley has metaphyseal chondrodystrophy, an extremely rare condition that gives him very short and stubby legs. In fact, this condition is so rare that there is only one case study identical to Parsley’s in the feline archives. 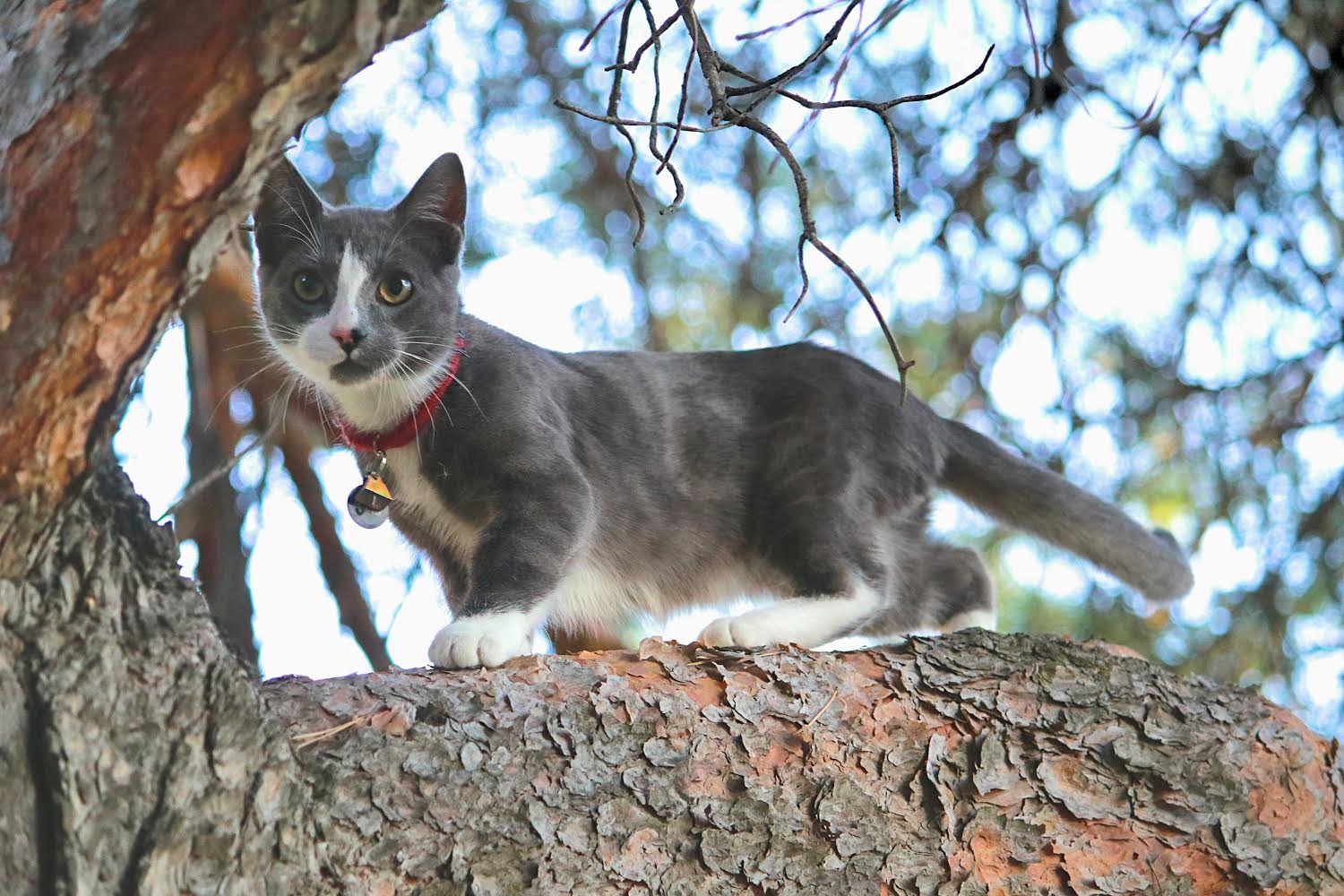 While the condition can be painful or even prevent a cat from being able to use his legs, Ott says Parsley isn’t showing any of these symptoms. In fact, at just 5 months old, he’s already been on quite a few adventures as a leash-trained kitty, a notion he took to almost instantly.

“I feel like the luckiest cat owner in the world, because we had virtually no trouble with leash-training,” Ott said. “I think that can be attributed to the fact that he came from a long line of barn cats, so maybe he had that outdoorsy, adventurous spirit inside him from the start. Parsley is also very good at reading subtle cues from me, so I think he quickly learned how to walk with the leash and harness, and made the correlation between the leash coming out and fun times outside.” 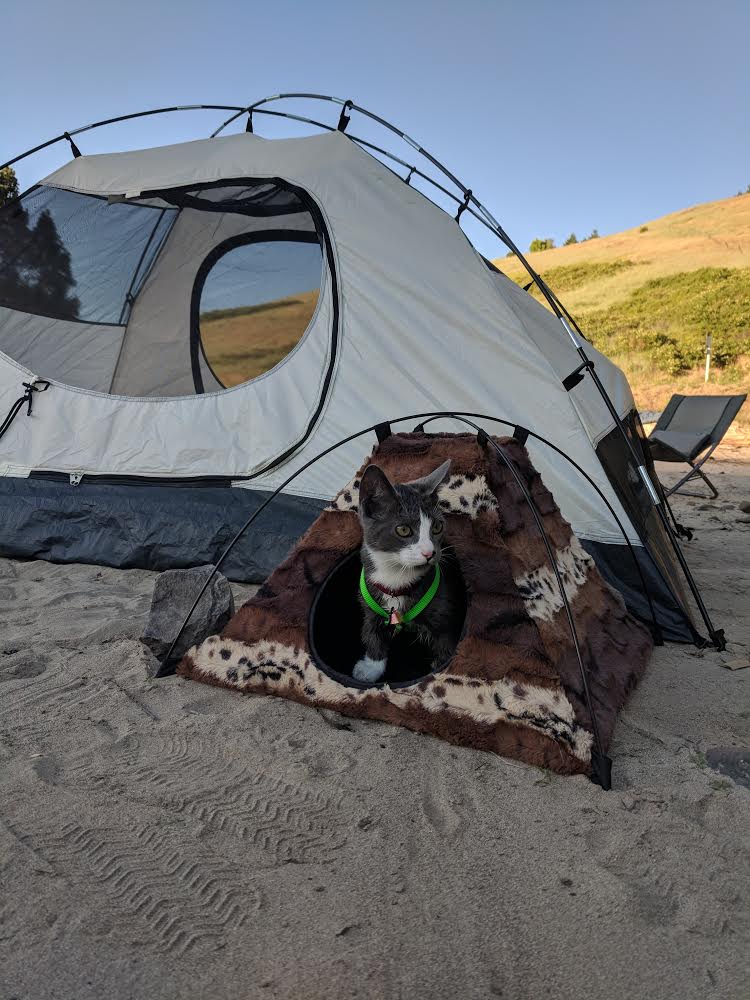 “Parsley is always open for new adventures,” Ott said. “We’ve taken him to a few awesome spots in Idaho and Washington, and our personal favorite, Lake Wallowa in Oregon, where he went kayaking.”

When Ott starts veterinary school this upcoming fall, they’ll have to keep the adventures local, but for now she’s been trying to expose Parsley to as many adventures as possible.

“Right now we’re planning a trip to Banff and Jasper National Parks, so we’re very excited for that.”

But she doesn’t want to stop there.

“There are so many adventures on our bucket list. Visiting all of the national parks in the United States is our more lofty goal for the future,” Ott said. “But truly, at the heart of the bucket list, we want Parsley to safely enjoy every adventurous activity that he can possibly do. Stand up paddle-boarding? Yep. Going on a helicopter ride? You got it. Spelunking or surfing? Definitely. Heck, if there’s a way he can safely and enjoyably go rock climbing, we want to try it. I think there’s a beauty to a well-rounded individual that can adapt to new situations, whether it’s a cat or a human.” 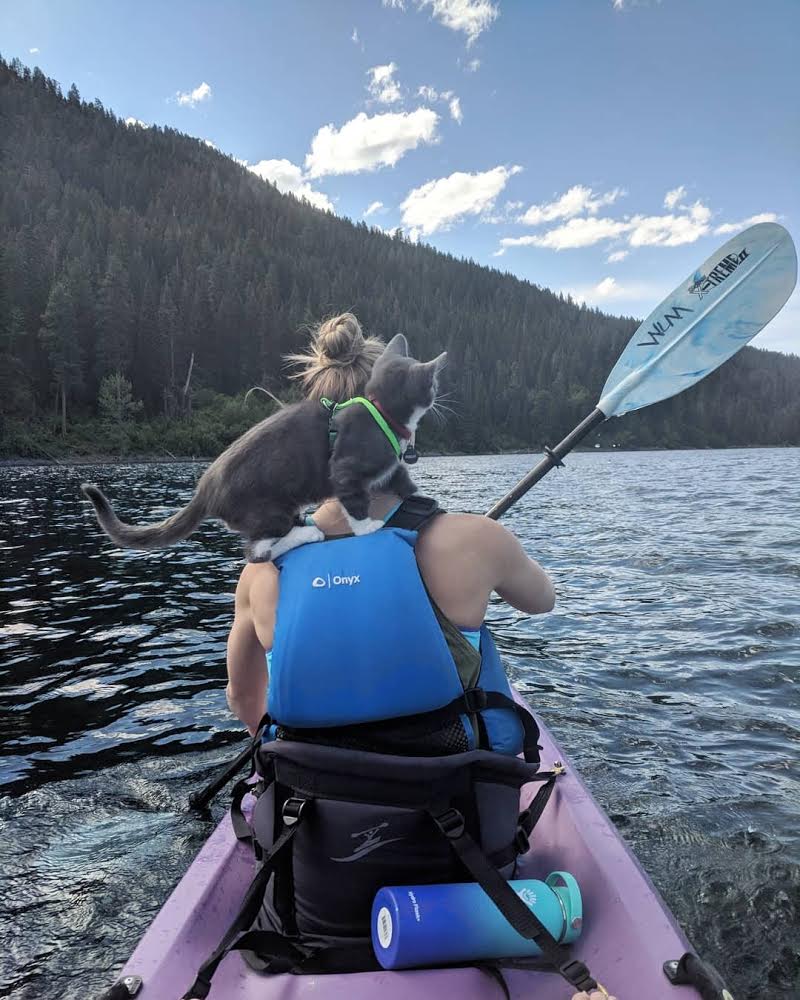 Ott says the joy in taking Parsley on adventures is that it improves his happiness and well-being as well as her own. But she also hopes to inspire and help enact change for the greater adventure cat community.

“It’s a bit frustrating that so many outdoor outfitters have outdoor dog equipment, but don’t have any for cats,” Ott said. “We hope that by sharing our love of adventures and by joining this wonderful small community of adventure cats in existence, that we can inspire a growth of resources for adventure cats in the world, and help challenge the norm of a cat always being a sedentary indoor house pet.” 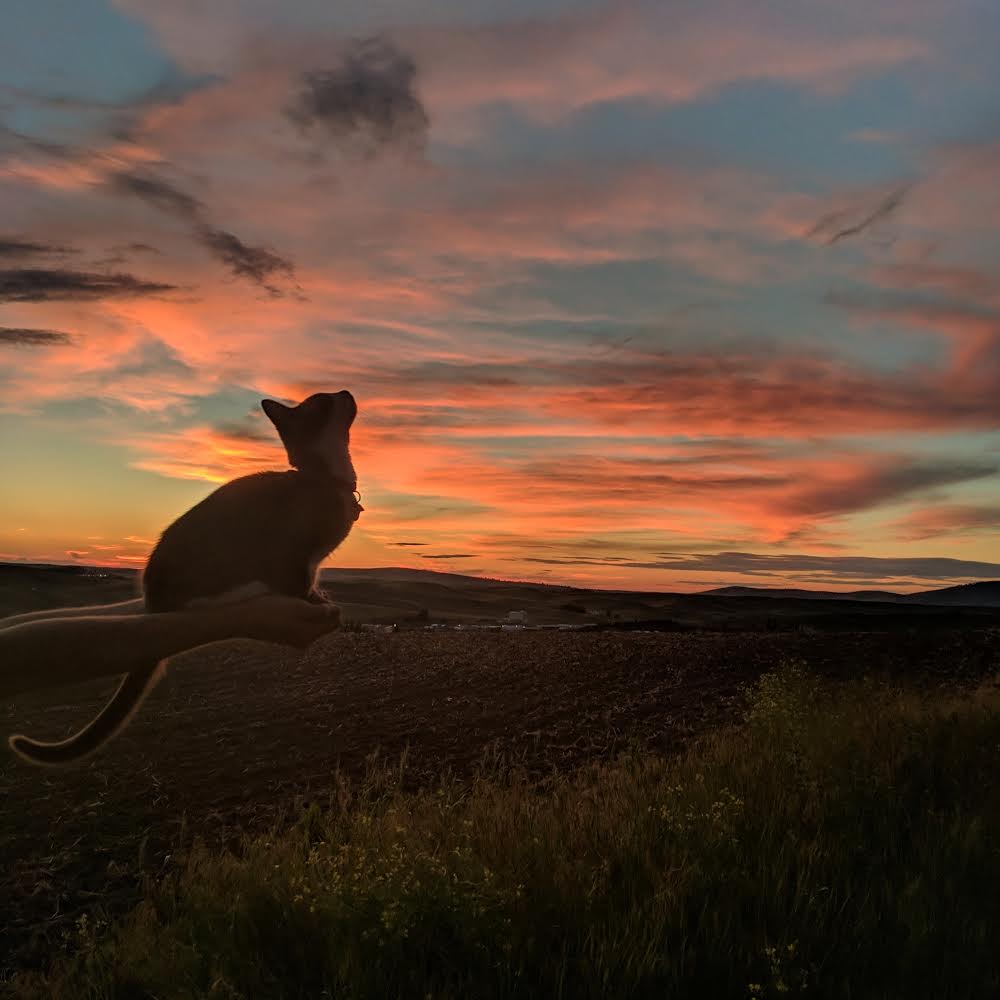 Scroll through the gallery at the top to see more photos of Parsley, and keep up with all his adventures on Instagram.