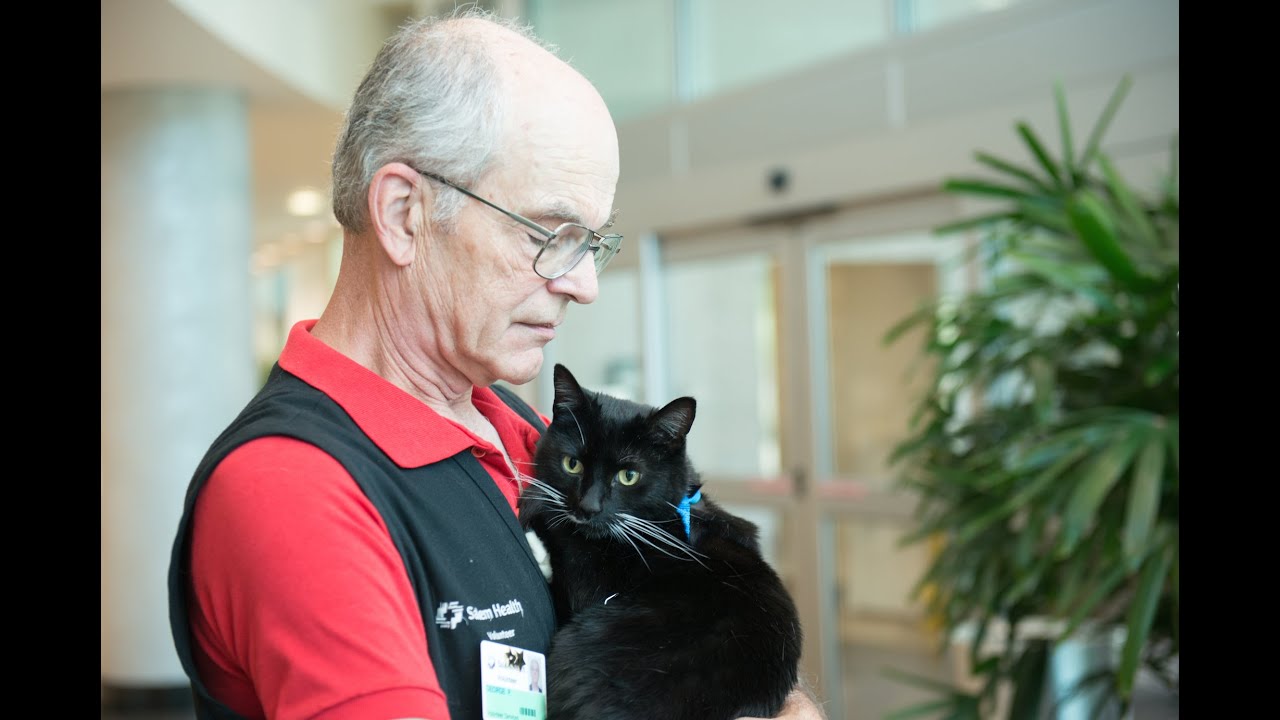 Piter and his cat, Junior, both volunteer their time at Salem Hospital in a special way.

Piter discovered the hospital provided the perfect setting where his cats could make a big difference—by helping patients in ways humans cannot.

Piter has volunteered as a certified pet therapy handler for nearly a decade. Junior is one of his four therapy cats—and all of them are rescues.

“He’s really good with kids. He’s nonjudgmental,” said Piter. “He just curls up with them. I just watch the kids just relax. He provides comfort for them.”

Before they are allowed in the hospital, therapy animals needs to get certified first by going through basic training through a reputable outside organization, like Pet Partners.

Staff from Salem Hospital’s volunteer services department then interviews the handlers and pets, and tests them on-site—to determine their readiness to become volunteers.

“Cats … they’ll do it if they want to do it. You can’t make a cat do anything that they don’t want to do. And these guys really seem to enjoy it,” said Piter. “With some of the tougher situations, I have to pry him out of the bed sometimes to get him to go home. He doesn’t want to go home. He wants to stay with the patient.”

Piter must follow strict rules. The cat with him always has to be on a leash, plus have a blanket under them as a protective barrier to a patient’s bed.

“We go on the floor, talk to the nurses and say who do you think would benefit from a cat visit or who has talked about missing their animals and things like that. And those visits usually work out pretty well,” said Piter. “Some people just aren’t interested … and that’s okay too.”

During the week, Piter works as a technician in Salem Hospital’s emergency department.

When he volunteers on his days off, He always stops by the ER to visit staff members who are curious to see which cat is joining him that day.

“Junior has got a few favorites down there too,” said Piter.

So how much longer will Piter keep volunteering with his cats?

“Who knows? We’ll just keep doing it … because we like to do it. We enjoy doing it,” said Piter. “At this point in time, it’s hard to imagine not doing it. I’ve got three willing partners. So why not? It’s extremely rewarding and I think it matters.”
———————————————–
Salem Hospital is part of Salem Health, along with West Valley Hospital, Willamette Health Partners and other affiliated health care organizations offering exceptional care to people in and around Oregon’s mid-Willamette Valley. Salem Hospital received the Distinguished Hospital Award for Clinical Excellence™ from Healthgrades in 2014, placing it among the top 5 percent of more than 4,500 hospitals nationwide. Visit us at salemhealth.org; “Like” us on facebook.com/salemhealth; follow us on Twitter: @salemhealth.