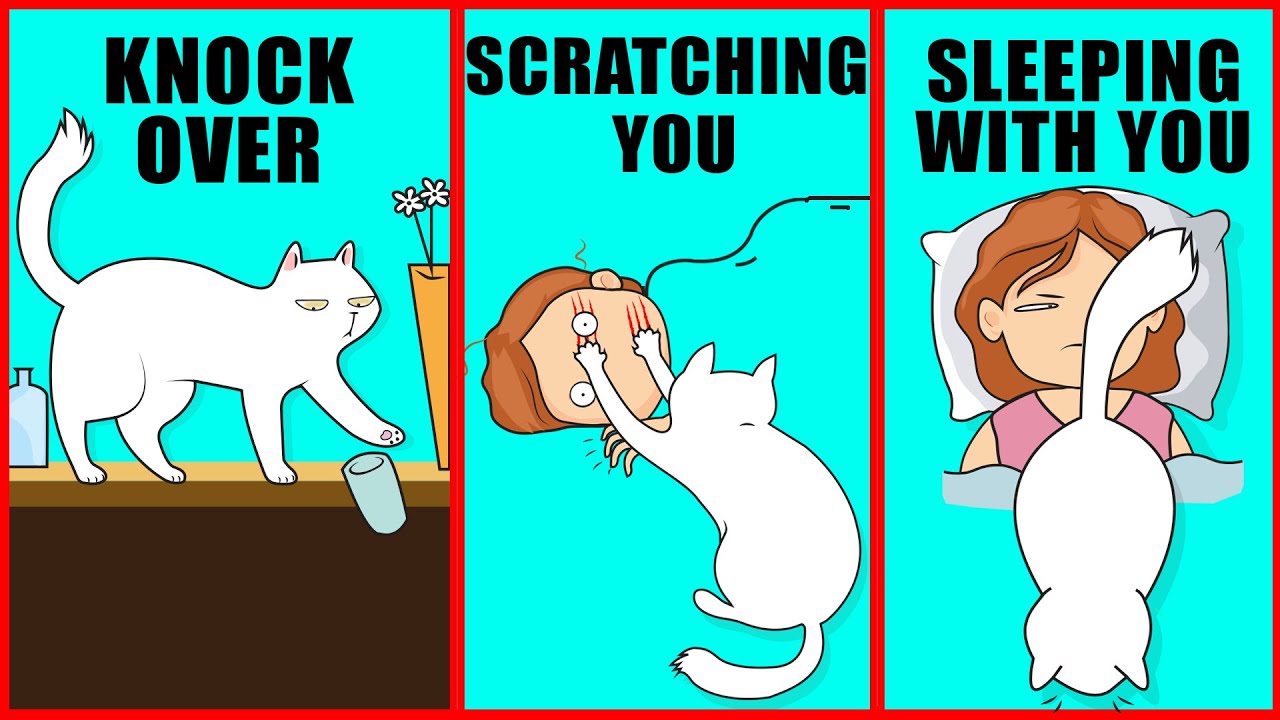 Why cats slow-blink at you?
You have probably noticed that your cat sometimes looks at you, then slowly blinks repeatedly, even squinting their eyes a little. The slow-blink is an important element of feline body language. It is a sign of love and trust.
Interestingly, a scientific study published in the journal of Scientific Reports found that a cat is more likely to approach an unfamiliar person who is slow blinking at them, and that cats will respond to a human’s slow blink with a slow blink of their own. When people replicate that slow-blink by narrowing their eyes, it makes them more attractive to the cat, making the cat more likely to approach.
Why cats sleep on your bed
There are actually a few reasons that cats like to sleep with you.
Cats love heat when it is cold. Despite their furry coat, they are always looking for the warmest places in the house.
So it’s not surprising that your cat looks for you at bedtime. You’re a human radiator and they want to get warm and comfortable.
Another reason that your pet likes to sleep with you is safety. Just like humans, cats feel more secure when their loved ones are near.
When cats are sleeping, they are at their most vulnerable state. By being around their humans, they can rest easier knowing there is some safety there. This means that your cat trusts you and they feel secure with you. Your cat knows you’re not a danger and you can even protect them if needed.
Of course, cats also sleep with you simply because they love you. They enjoy your company and want to spend time with you.
On that note, you’ve probably noticed that some cats prefer to sleep on your head. This is because you lose a lot of heat from your head. Cats are also drawn to our heads because our faces and scalps have sebaceous glands that give off a distinct scent.
Why cats love to sit on squares
Cats are notorious for crawling into small, enclosed spaces. Interestingly, new research has shown that taping the outlines of squares onto floors also prompt cats to step inside.
Scientists believe that the marking on the floor creates some illusion on the floor that doesn’t actually exist. It has enough similarity to a low-sided box that some cats are attracted to it for safety. It’s especially true because the markings on the floor have a different smell. Cats probably feel as if they are ‘in’ something ..
Feline curiosity is another reason that some cats are intrigued by the square tape. Because cats are very sensitive to their environment, the tape square is attracting to them just because it’s different and new. To felines, a circle on the floor is a place that smells differently. If the smell has changed, they feel like they should inspect it.
Why cats knock things over
Cats have a reputation for knocking things off the table, shelves, or counter tops.
This behavior can be seen as annoying mischief, but experts suggest there is a deeper meaning.
Cats want to know the nature of everything in their territory. They are natural investigators and like to analyze and test-out things that are novel.
They feel their surrounding with their paws which are incredibly sensitive.
Knocking things over is also fun for cats. A moving paw-patted object combines all of the best aspects of stalking and chasing prey. Cats are prey driven and as an object falls off the table, it may simulate a prey “jumping” which can be interesting for them to chase or observe.
But remember, cats also knock things over because they have learned that it is an easy, quick way to get their human’s attention. Cats are smart animals, and they know — based on experience — that if they knock over your plants or water cup, you’re going to come running toward them.
Why cats sometimes suddenly scratch or bite the person who is petting them?
Many cats purr and rub themselves against you until you pet them, but then they’ll scratch you out of nowhere when they’ve had enough. This type of behavior is hard to understand, especially when you compare them to dogs.
Although cats seem to lash out and scratch people for no reason, there is actually an explanation for their behavior.
Remember that long sessions of petting are not part of natural cat behavior. Friendly contact between felines is often short – they will rub against each other or twine tails for a few moments then move apart. Even when cats groom each other, long sessions may end in a spat when one of the kittens decides he has had enough.