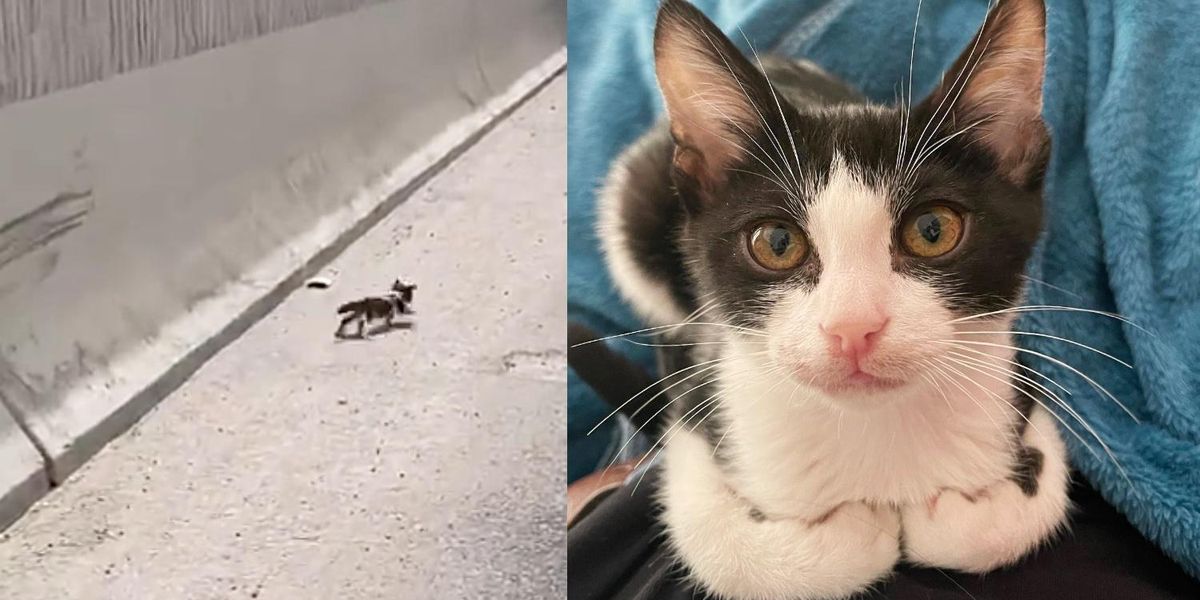 A woman took a wrong turn on a highway but ended up rescuing a kitten and changing his life.

Laila D’Souza was on her way home when she accidentally took a wrong turn on a highway. Little did she know that she was about to be in the right place at the right time for a precious little life.

“I spotted a terrified kitten dashing straight in front of my car in the middle of the highway,” Laila shared with Love Meow. She immediately pulled over and got out of her vehicle to check on the kitten.

“He somehow dodged all the cars and was running for his life even though he was exhausted.”

He was found on a busy highway all aloneLaila D’Souza

While Laila tried to get the kitten off the busy road, the frightened little one sprinted under her car to hide.

“A kind man stopped after watching me struggle to find him, and after sometime we were convinced that he’d run away. But something told me to drive really slowly back home, in case he was hiding in there, somehow.”

He was terrified after the ordealLaila D’Souza

Laila who runs an animal rescue in Kuwait, the Winston Memorial Foundation, had a hunch and decided to continue searching for the kitten after she was off the highway.

Two hours later, she heard a burst of crying coming from her car. She was finally able to locate the kitten and safely get him out.

The little guy named Hitch was estimated to be 5-6 weeks old. He was petrified and trembling after the ordeal. “I took him to the vet to get him checked out and made sure that he wasn’t hurt.”

Hitch might have used several of his nine lives, but miraculously, he came out unscathed. With a roof over his head, a comfy bed, and plenty of good food, Hitch began to relax and the fear in his eyes faded away.

The moment Hitch realized that he no longer had to hide or dodge any more cars, his demeanor changed. He switched on his purr motor for the first time and just kept it running on high.

In a few days, the once fearful kitten turned into an attention-seeker with a voracious appetite.

As his confidence rose, he became more affectionate and talkative. Hitch would chirp and squeak if he wanted something, and wouldn’t take no for an answer.

“He went from being terrified of humans to demanding affection. He was one of the most vocal kittens I’d ever fostered,” Laila shared.

Once he was ready to socialize with other foster kittens, he took to them as if they had always been friends. His personality was shining through as he zoomed around the house with his buddies without a care in the world.

After each intense play session, Hitch would walk up to his people and squeak his heart out for a dose of their love.

When he was big enough for adoption, he traveled across the ocean to a cat rescue in Washington DC, City Kitties DC, to find a place of his own.

He turned into a love-bugLaila D’Souza

It took a village from getting the kitten off the highway to helping him thrive in foster care to finding a good home.

Along the way, Hitch met many human and fur friends and showed them nothing but love and affection.

“The kitten who held onto my car from the highway to my house, flew across the world from Kuwait to Washington DC.” Now, Hitch has found his forever home.

“Life works in interesting ways, and taking that wrong highway turn was one of the best decisions I (accidentally) made.”

From a highway to a loving home, Hitch has found his happily ever afterLaila D’Souza

Related story: Cat Dances and Talks to Visitors at Shelter and Wants Everyone to Notice Him