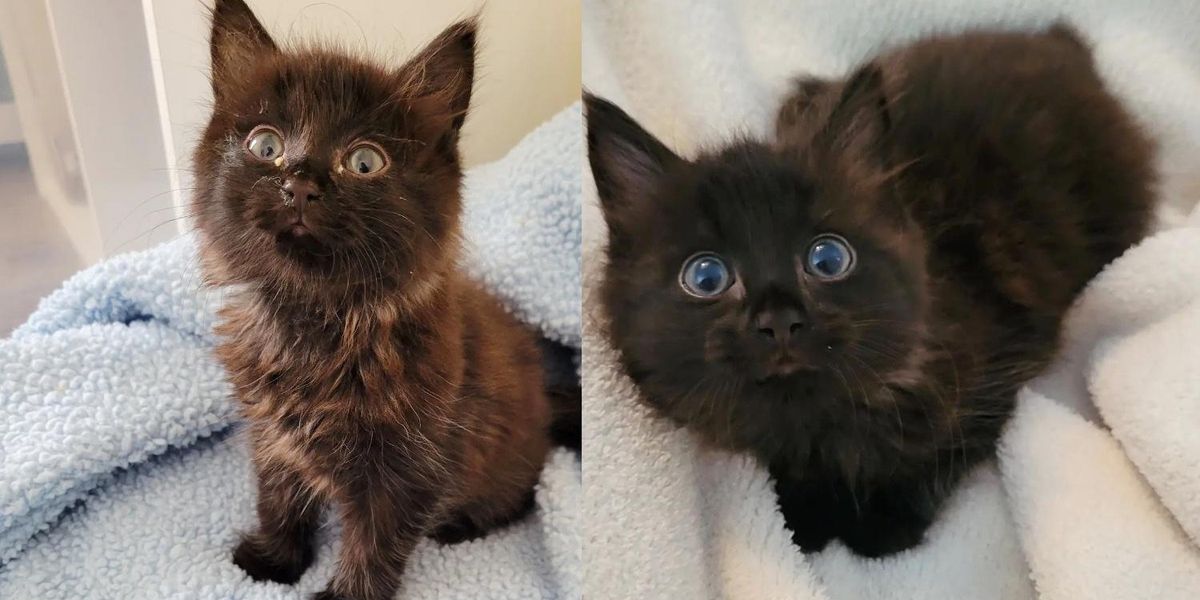 A feral kitten flourished into a happy couch cat when she found someone to trust.

A tiny 5-week-old kitten was found wandering the streets as an orphan all alone. She had an upper respiratory infection, an upset stomach and was very timid.

A good Samaritan spotted the kitten in poor shape and decided to intervene. They managed to bring her to safety and took her to the county shelter for help.

Knowing that the kitten needed round-the-clock care, shelter staff immediately reached out to the rescue community. Nadija, a volunteer of AnimalLuvr’s Dream Rescue, saw a picture of the kitten and knew she had to help.

Despite having her hands full with other fosters, she rushed to the kitten’s rescue, so the little one could start her healing process in the comfort of a foster home.

“Boo (the kitten) was very scared when she first arrived here and very unsure about me and her new space. She was meowing out of fear,” Nadija shared with Love Meow. “She got crusty eyes, nasal discharge, a dirty bum, and she was very hungry.”

She was nursed back to health and her personality emergedNadija @tiny.paws.fosters

Despite being very wary of humans, Boo couldn’t resist the offer of food and slowly warmed up to her foster mom. She began to accept being petted as she realized that people aren’t so bad.

“After some pets, cuddles and a snack, she felt much safer and took a nice nap on her cozy blanket with a heating pad.”

After a few days of nourishing, resting and healing, Boo was all cleaned up, made good gains, and her eyes were clear and bright. Her fur coat became softer and fluffier, and she looked like a new cat.

When Boo was comfortable enough to come out from hiding and fully embrace indoor life, her confidence grew and her endearing personality emerged.

“She is a sweet, snuggly, brave and playful kitten that ventures out into the rest of the house every day for a few hours before she runs back into her safe space which is my office,” Nadija told Love Meow.

Boo has discovered her favorite place to hang out – the big couch. She will hop on the couch to join her people, and pounce or roll around on their lap exerting unbridled energy.

“She even joined me on the couch all by herself over the weekend for a nap which is huge for such a tiny kitten that was so timid. Boo loves to play with the ball track toy, swats tiny fuzzy toys around, and is a pro at climbing the cat tree.”

In just a few weeks, the once fearful feral kitten has blossomed into a happy, boisterous bundle of energy. She now zooms around the house without a care in the world, and plops down on a lap whenever she needs a nap.

Boo walks around with her tail held high, meows for attention, and ambushes her humans as they walk by, launching the most adorable cute-attacks.

Boo will be introduced to another singleton her age in the near future, so she can have a feline buddy, a partner in mischief, to tumble with. For now, she has a lot of supervising (humans) to do.

After a rough start, the fluffy kitty has found her courage and is reveling in her VIP life, where her inner panther kitty roars.

Related story: Kitten Who is Done with Outside Life, Decides to Sit on the Driveway of a Home Until She is Taken in

Kitten Kiki begging owner for a new home
Cat taking care of an egg #shorts #shortvideo
Baby Monkey Bon Bon Goes Koi Fishing And Eats With Kittens Puppy |Animals baby monkey
We Found This in the Stomach After 2 Years!!!Poor Cat!
Watch and laugh😺Funny CAT video that will make your day!